Biting Back: Cambodia's Taste for Insects 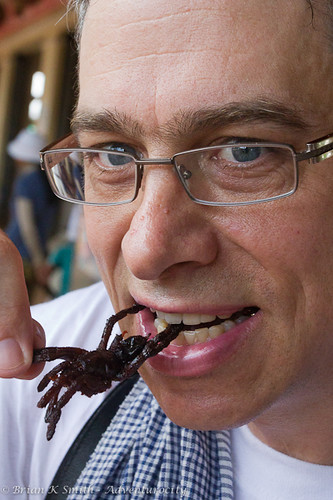 Browsing the booths at the San Francisco Book Fair in 2000, a large paperback caught my eye on the Ten Speed Press table. On the cover, a Khmer girl wearing a red and white-checked krama on her head was biting into one of two spiders on a bamboo skewer. Her left hand, grasping the top of the skewer, was partially splayed out in what looked like the "okay" gesture while she held the spider's head between her pearly teeth. She appeared naturally content.

Cambodia was just one of 13 countries that Man Eating Bugs surveyed where people eat insects. Peter Menzel and Faith D'Aluisio had documented in full colour eating the likes of flying ants in Thailand, Japanese caddis fly larvae, and scorpions in China. Needless to say, I bought it.

Although I love food, I wouldn't go so far as to call myself a culinary adventurer with respect to my day-to-day eating habits. I don't actually relish the thought of popping sheep's eyeballs or tucking into pig's intestines. While I have ventured considerably beyond my North American meat and potatoes upbringing, the meat and seafood I cook at home is still supermarket conventional. That changes, however, when I travel. I attempt to transform my mind into a tabula rasa to let go of my inhibitions and prejudices. That way, I can better absorb and understand the culture of my new surroundings.