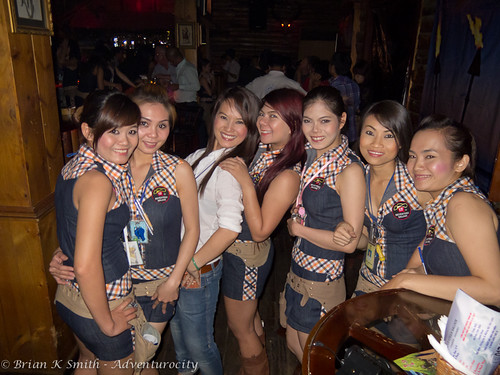 Exploring the Pham Ngu Lao area around our hotel on our first day in Saigon, Brian and I came across the distinctive Seventeen Saloon, looking like it had landed from a spaghetti Western movie set. Intrigued by its log house exterior and totem poles flanking the entrance, we returned in the evening, just in time to catch the tail end of happy hour. Tiger beer was on special -- two for one -- so we ordered a couple of rounds to extend the happiness and wash down the complimentary popcorn.

Given the canned Country & Western music playing on the sound system in the beginning, we thought there would be more of the same when the house band came on at 9:00pm. But to our surprise, after an English-language introduction (they were from the Philippines), the head banging began! Although the odd request would result in songs from the Eagles and The Beatles, the B&U Band played mostly hard rock and heavy metal covers from bands, like AC/DC, Dream Theater, Guns N' Roses, Metallica, Nirvana, and Scorpions. Roel, one of the four vocalists, did a particularly good impression of Klaus Meine; Amber of Lacuna Coil vocalist, Cristina Scabbia. Ronnie's favourite had to be Axl Rose, and Liza was a dead ringer for Tina Turner. 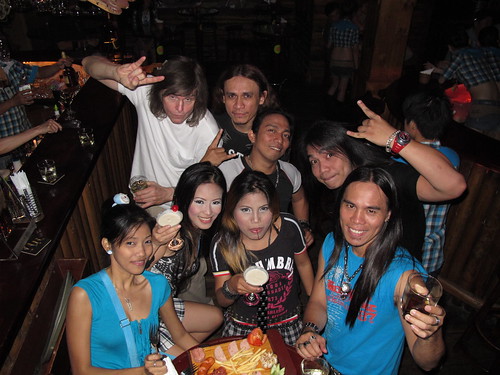 Brian and I were impressed with the B&U Band's energy and skill. We paid Seventeen Saloon a visit each night for the rest of our time in Saigon, getting to know the band members, submitting song requests, and engaging in some audience participation. The above video was shot on our last night in Vietnam. Here they play Van Halen's version of "You Really Got Me" by The Kinks. Liza, the lead singer on this song, wears an R&B Brewing Red Devil Pale Ale t-shirt that we had just given her as a thank you. We'll be kitting out the rest of the band when we return.