Beyond the Nine Dragons Revisited for the First Time 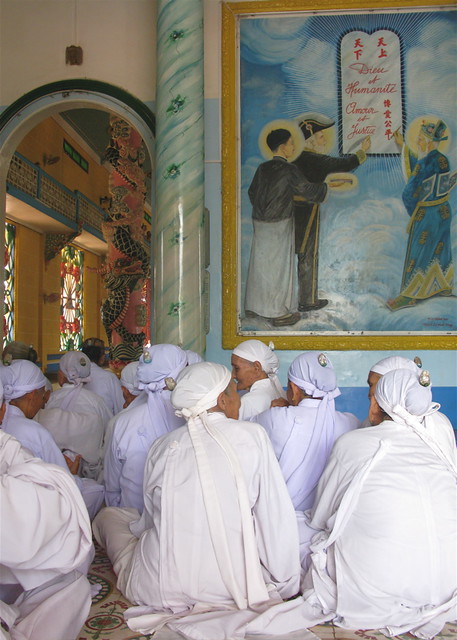 Entering the foyer of the Cao Dai Holy See, I scanned the scene for suitable photos to take, not that they were hard to find. Colourful priests and white-robed practitioners were milling about, waiting for the signal to begin noon prayers. It was more a matter of choosing a subject, looking for good lighting, and framing the shot than having to search for something interesting. Then I saw it.

There, on the wall above a group of cross-legged nuns, was a mural I was familiar with. Depicted were three men with golden haloes, standing on a mountain top before a radiating tablet, hovering before them on a backdrop of blue sky and puffy white clouds. On the right, was a bearded, white-haired Asian man wearing the blue silk robe and cap of a Chinese scholar official. He was finishing writing with a calligraphy brush in red ink, the last of four characters on the tablet that read, Bó'ài Gōngpíng (Universal Brotherhood and Justice). To the left of the tablet, stood a European wearing a bicorn hat and the uniform of a 19th century military officer or official. With a quill pen, he was completing writing, Dieu et Humanité. Amour et Justice" (God and Humanity. Love and Justice). Beside him was another Asian dressed in a Chinese-style cap and changshan, holding an ink tablet.

The unusual painting depicts the Cao Dai religion's Three Saints signing a covenant between God and humanity. Astonishingly, the saints are Sun Yat-sen, Victor Hugo, and the Vietnamese poet, Nguyễn Bỉnh Khiêm. I recalled the image from a photo in The Mekong: A River and its People, a book written by John Hoskin and photographed by Allen W. Hopkins. When I was living in Hong Kong, Hopkins had approached my first employer there about adapting the book to CD-ROM. They weren't interested. Shortly after, the business was sold and the office closed. 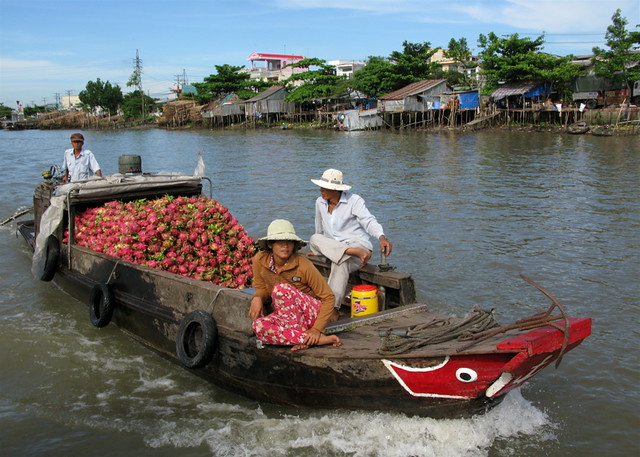 A colleague of mine, who wanted to start up another company with me, suggested we take on The Mekong as our first product. I agreed and we flew to Bangkok, meeting with Hopkins to formalize our co-operation. While there, we immediately set to the task of gathering additional material to supplement that from the book. We spent hours at the light table in Hopkins' office, going through his slides. This part of the travel CD-ROM development process always inspired me to want to travel to new places. Here I was, learning about the lands and peoples of the Mekong beyond what was familiar to me – Vietnam.

Most people in North America, if they knew about the Mekong at all, had probably heard about it in connection with the American war. They only associated the river with the delta, which the Vietnamese call Cửu Long, or Nine Dragons. We needed to come up with a more marketable name for our CD-ROM title. I suggested calling it Beyond the Nine Dragons to evoke the same discovery I had just experienced. We did.

Naturally, I began formulating plans to visit the Mekong. Ideally, I wanted to follow in the footsteps of Hopkins and Hoskin, starting from the river's source in Tibet. At that time, however, tourism wasn't very well developed in the region. It wasn't going to be a weekend in Vegas. I would probably need a number of weeks, which was unlikely with having a startup company. As time passed, I narrowed my ambitions to visiting the three countries of Indochina. Alas, even that did not materialize. The Mekong remained a tantalizing mystery for another 16 years. 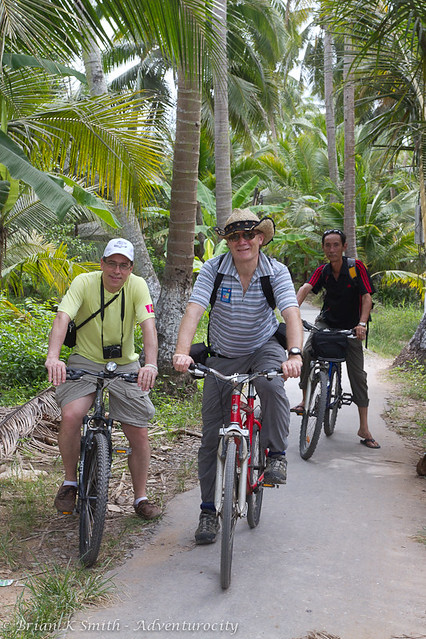 Hopping out of the van on the outskirts of Ben Tre, we pulled our mountain bikes from the back, mounted up, and headed off down a concrete pathway with our guides – Mr. Kinh in the lead, JJ sweeping from behind. The weather was hot and humid. But for much of the next three days, Brian and I leisurely rode along rural backroads shaded by tousled palms and prolific fruit trees in this rich, agricultural rice bowl.

Beyond a place to eat lunch and a destination to sleep overnight, our itinerary was flexible. We were free to investigate whatever interested us. A short distance from the van, we already found a reason to stop. A family had gathered in the shade beside their home to play music and sing folk songs. A woman sang about the proper behaviour of young, unmarried women, while the men accompanied her on instruments. I struck up a conversation with an older woman standing next to me. She had worked for the Americans during the war, so welcomed the opportunity to speak English, which she no longer used that often. When the song ended, we remounted our bikes and the family bid us farewell.

Over the next three days, our experiences were very similar – intimate encounters with villagers going about their daily lives. We saw people making sticky rice rolls, talked to a farmer growing pesticide-free cocoa, witnessed a funeral ceremony, saw how rice noodles were made and rice was milled, visited a durian wholesaler and a large floating market, stopped at a bird sanctuary, and even got a haircut by a village barber. Ironically, what we found to be compelling about the Mekong delta was not an attraction of world heritage proportions, but what we would think of as mundane in our own country. We didn't experience any resentment or hatred by the people we encountered. Rather, there was a mutual curiosity that resulted in a better understanding of our shared humanity.

Vietnam is like a shoulder pole connecting the two rice baskets of the Red and Mekong river deltas. Justly famous for its food and beaches, you might be surprised by its temperate mountain regions and colourful ethnic minorities. If you enjoy culture, history, food, and outdoor activities, you will find ample reasons to visit Vietnam. To learn more about the country, read our articles and see our photos. Have any questions or comments? Become an Adventurocity community member and share them on our spam-free message boards.