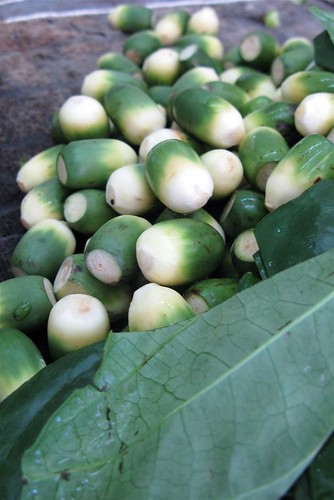 It's something you'll probably notice on your first day in Taiwan. You'd be forgiven for thinking that the flashing blue and red lights indicate the police were responding to an incident. That was my first reaction en route to my hotel in Taichung. But as you get closer, you'll see no "black & white" or the boys in blue. Rather, they announce a glass-fronted booth or a small family shop selling betel nut.

Betel nut is a stimulant that is popular throughout tropical Asia. Taiwan's "betel quid" consists of a drupe from the areca palm (Areca catechu) wrapped with slaked lime (calcium hydroxide) in a betel vine leaf (Piper betle). In other parts of Asia, flavourings, spices, and even tobacco may be added. The Formosan variant, however, has none of these. Consumers only have a choice between different-tasting red and white lime pastes or single- and duo-drupe quids.

Betel nut, or binlang in Mandarin, is a Taiwanese addiction. It is thought that 20 per cent of the country's 23 million inhabitants are consumers. It's the nation's second-largest cash crop after rice, the demand of which has even displaced land once devoted to the leading crop. Clever farmers, however, will find ways of producing more than one crop on their land. I met a coffee grower who provided his shrubs with their necessary shade from areca palms.

Betel nut consumption grew rapidly in the 1970s, when employers provided it to blue-collar workers to help keep them productive. Today, the industry supports some 70,000 businesses. However, even though the island accounts for 21% of the world's production, it is still inadequate to satisfy demand. So lucrative is the industry, that hillsides have been illegally cleared for the planting of areca palms. This has caused serious erosion problems because the tree's shallow roots are inadequate to bind the topsoil. 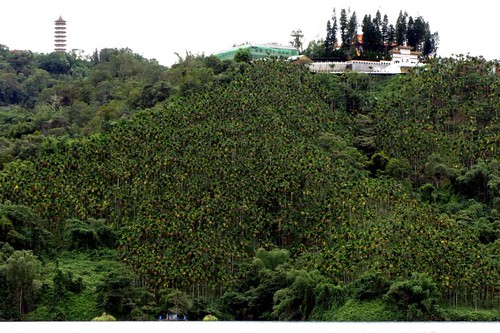 Many of those early to the binlang industry in Taiwan amassed legendary fortunes. With minimal barriers to entry in terms of either capital or technology, a gold rush ensued. As competition increased, a uniquely Taiwanese innovation evolved to market betel nut – binlang xishi, or "betel-nut beauties." These are young, scantily-clad women whom you'll find in neon-lit glass booths, announced by green fluorescent tubes and the flashing lights that first caught my attention – what I came to call the "betel nut dazzler."  They are common along major highways, as truck drivers are the top betel nut addicts.

Binlang xishi are named after a legendary beauty in ancient China, Xi Shi, of whom it was said that her striking looks caused condors to stop flapping their wings and fish to forget how to swim. Taiwan's original betel nut beauties are believed to have been the Shuangdong Girls who sexed up the opening of the otherwise pedestrian Shuangdong Betel Nut Stand in Guoxing Township. The Shuangdong Girls may have been glamorous, but today's binlang xishi are purposefully provocative. Sex sells. That's not to say they are prostitutes; they aren't. Selling betel nut, however, doesn't demand the polish of the automobile show girls or beer babes prevalent in many Asian countries.

I had never tried betel nut before, so I was curious to give it a go. After mentioning this a few times, my host obliged and our driver chose a mom & pop shop located in a row of shop houses situated on the highway. Naturally, I was hoping to be introduced to a binlang xishi for the full experience, but it was not to be. They seem to exclusively inhabit the glass booths. Instead, I enjoyed the company of a somewhat large housewife with black-stained teeth, wearing jeans and a zebra-print blouse. Her hair was tied back in a manner that was more for convenience than appearance.

The establishment was not really a shop in the common sense of the word. It was a spartan space cooled by two fans that accommodated little more than a work table and two commercial-grade, glass-fronted refrigerators containing water and soft drinks for sale. A radio echoed, keeping the woman company as she efficiently assembled a mound of betel nut. The finished product was then packaged in plastic baggies of twenty and stored in one of the fridges. I wasn't interested in consuming the whole bag, so my driver volunteered to share them with me. 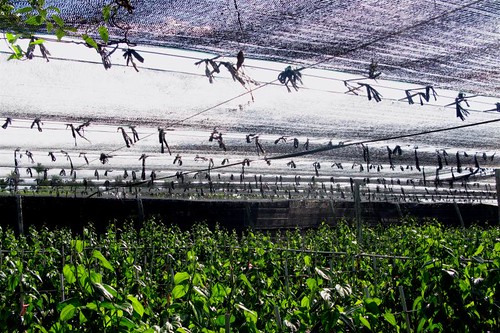 I sat down at the table with the woman, popped a quid in my mouth, and began to chew. You don't actually swallow the binlang or the resulting red juice. Let it sit in your mouth to draw out the psychoactive ingredients – arecoline, guvacoline, phenols – into your saliva which are then absorbed into your bloodstream. Spit out the juice and continue to gnaw, repeating the process until there is no more to be had. Betel nut is quite fibrous, so it requires the action of a cud-chewing cow. My quid was made with the more effective white paste that did nothing to mask the grassy, bitter taste. I could see why people would want to add some sort of flavouring to make it more palatable. It also left my mouth dry, so it's no surprise that betel nut sellers conveniently have cool drinks on offer.

I consumed two quids that first time and experienced a rush of energy that felt like drinking a few cups of coffee in one sitting. Maybe because I am already a regular coffee drinker, I didn't find myself gripped by an addictive impulse. Others may be affected differently. Betel nut is also perfectly legal in Taiwan, so there wasn't the thrill of doing something we would normally consider illicit, like going to a coffee shop in Amsterdam. Nevertheless, binlang is an aspect of Taiwanese culture that has generated political controversy within the country over questions of health, morality, sanitation, and the environment. Therefore, when you sample betel nut, it offers the possibility of discussion with locals whom might otherwise avoid the topic because of concern over the image of their country. However, in return, you'll have gained a valuable insight into contemporary Formosan society and come away with a more meaningful experience.

Taiwan is an excellent destination for experiencing traditional Chinese culture, enjoying an exciting cuisine, and engaging in outdoor activities, such as cycling, hiking, and watersports. Learn more about what makes the island of Formosa unique with Adventurocity's articles, photos, and videos. Join our Forum to ask your questions or share your tips.

# Re: Oral Cancer — Rick Green 2010-04-06 19:50
If you try it once, Poagao, it's highly unlikely that one will get oral cancer. Nevertheless, it is true that those who develop a serious, regular habit will not only stain their teeth black but, like chewing tobacco, run the risk of contracting cancer. My suggestion to try binlang is directed towards North Americans visiting Taiwan. Therefore, it is doubtful this will happen because betel nut is not available here.
Reply | Reply with quote | Quote | Report to administrator
# Taiwan's Betel Nut Buzz — Poagao 2010-04-06 12:12
...in return, you'll have gained a valuable insight into contemporary Formosan society and come away with a more meaningful experience.

...and a real chance at oral cancer! It's win-win!
Reply | Reply with quote | Quote | Report to administrator
# Re: Betelnut beauties — Rick Green 2010-04-06 07:32
Thanks for the offer, Tobie. I'll take you up on that the next time I'm in Taipei. Given the excellent work you've done over the years covering betelnut beauties, I'm sure it will be memorable.

Rick.
Reply | Reply with quote | Quote | Report to administrator
# Betelnut beauties — Tobie Openshaw 2010-04-06 07:25
Well Rick if you'd like to meet a real betelnut girl for the "full experience", you're welcome to come out for a drive with me one evening.