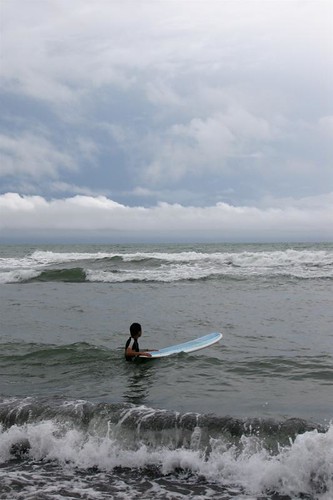 , famously said, "Charlie don't surf!" He was dismissing his men's concern over attacking a Vietnamese village at the mouth of the fictional Nung River because there were perfect surfing conditions just off the beach. A keen surfer, this was reason enough for him to order the village's capture from the Viet Cong.

With Hawai'i, California, and Australia being the world's most popular surfing locations, one could be excused for thinking that Asians don't surf. But here I was on Taiwan's Northeast Coast, standing on the beach at Wai'ao on a blustery day, clouds hanging overhead, grey with annoyance. Guishan (Turtle Mountain) Island sulked on the horizon, its crown shrouded by a wreath of white clouds. Waves impatiently crashed onto the shore, depositing detritus as they awaited an impending typhoon's fury. The black sand beach was practically deserted, except for two dozen or so surfers for whom the weather was a clarion call. I was the only non-Asian.

It was here that I met Mr. Ku, owner of the Be Cool Surf Shop. His deep tan, t-shirt, board shorts, laid back demeanor, and readily-proffered shaka marked him as part of the international surfer fraternity. Undoubtedly, some of the beach bums are just engaged in the scene trying to be cool, like the Caucasians in the States who dress in gangsta gear and listen to hip hop. But those like Mr. Ku are fully-committed to developing Taiwan's surf culture by operating small businesses that support its growth, teaching newcomers the skills, renting them equipment, selling the gear, staging competitions, and offering cheap beach accommodations. 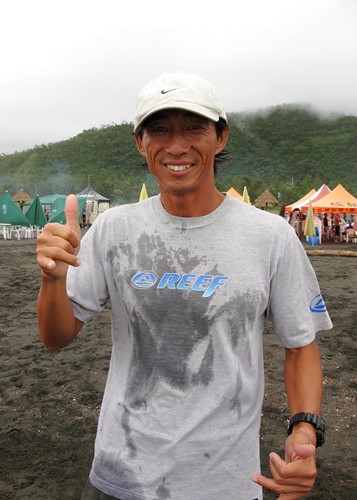 Surfing in Taiwan is a recent phenomenon. It was introduced to the island in the 1960s when American servicemen on R&R from the war in Vietnam could rent surfboards at, what was then called, McCauley Beach, near Jinshan Township on the north coast. This was when surfing and Southern California beach culture became a major U.S. fad due to the popularity of beach party movies and surf music from the likes of The Beach Boys

("Wipe Out"). Most Taiwanese, however, were unable to take to the waves until after martial law was suspended in 1987.

Jeff Sun opened the country's first surf shop at Daxi, on the shore of Mi Yue Wan (Honeymoon Bay) in 1980. Twelve years later, Jung Wen-Chen founded the the R.O.C. Surfing Association in Taipei. Since then, the sport has grown dramatically. Jung estimates that, today, approximately 25,000 to 30,000 Taiwanese surf.

The most popular spots to surf are on the Northeast Coast, which are readily accessible from Taipei via road or rail. However, I was given the impression that the better waves are in the south, where the weather is warm enough to wear boardshorts throughout the year. As luck would have it, I would be in the south while the 2009 Kenting Cup Surfing Competition was underway and could see for myself.

If you're going straight to Kenting upon arriving in Taiwan, you would either get a connecting flight from Taipei to Kaohsiung or take the 90-minute trip from Taoyuan to Zuoying via Taiwan High Speed Rail. From both the airport and the train station, the best onward connection to Kenting is by bus. My itinerary, however, took me from Hualien south by car. 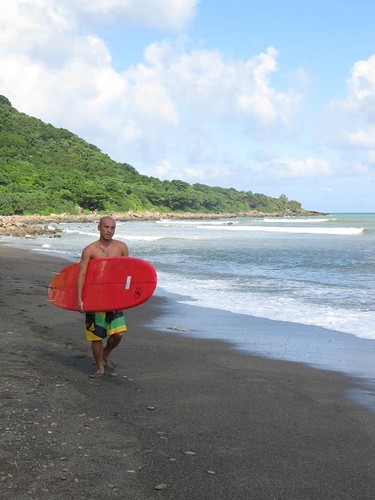 Crossing the Tropic of Cancer, it grew decidedly warmer and my disposition sunnier – a welcome contrast to the October chill and grayness encountered in Wai'ao. Rather than taking the scenic route along the coast and exploring other surfing spots, like Dawu, we wound on a narrow track through verdant hills and sleepy settlements for a more direct route to Jialeshui, so as not to miss the surfing competition.

Turning off the highway, the banners lining the road and surfing-themed bumper stickers on parked vehicles indicated we had found the right place. I immediately felt the heat and humidity upon stepping out from the car's air-conditioned comfort. A steady onshore breeze held the deceptive promise of relief as I passed through a small tree-lined gully, heading towards the shore. Climbing to the crest of the dune, Jialeshui spread before me in a long grey crescent at the mouth of the Gangkou River.

A line of red and white canopies sheltered officials and spectators from the sun as they watched the competitors battle for surfriding supremacy. The beach was divided in half with body boarders at the south end, long and short borders to the north where a group of fisherman stood their ground at the shore's extremity. A constant succession of white-crested waves rolled in, but didn't look particularly challenging. It reminded me more of Waikiki Beach than Oahu's fabled north shore. That isn't to say that Taiwanese surfers aren't serious about their sport. It just takes more effort to find a great wave to carve out the ultimate ride. They'll even go out during a typhoon when the storm surge boosts the swell, which is illegal.

The day before I left Taiwan, Taipei was feeling Typhoon Parma's presence, even though the eye of the storm hovered over the northwestern corner of Luzon in the Philippines. I expect some surfers were out trolling the coast, playing cat-and-mouse with the police.

Taiwan is an excellent destination for experiencing traditional Chinese culture, enjoying an exciting cuisine, and engaging in outdoor activities, such as cycling, hiking, and watersports. Learn more about what makes the island of Formosa unique with Adventurocity's articles, photos, and videos. Join our Forum to ask your questions or share your tips.