Bless Our Trip (or the Bus From Hell) 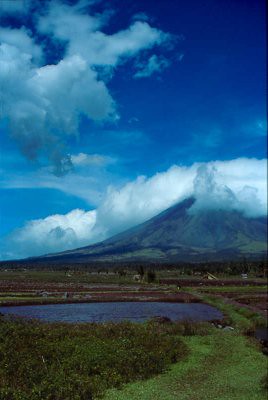 Easing into a seat near the front of the bus, I noticed a homemade crochet banner strung above the windshield. It hopefully declared in large letters, "Bless our trip." With the previous day's journey only too vivid a memory, I definitely counted my blessings.

The trip began with a short flight from Manila to Legazpi City near the southern-most point on the Philippine island of Luzon. The perfectly symmetrical cone of Mount Mayon volcano was our goal, along with a quiet beach away from the sun worshipping crowds.

As we made our descent, I admired the rugged tropical countryside covered in disheveled coconut palms gently rustling in the onshore breeze, disturbed by the unnatural uniformity of soggy dark fields freshly daubed with verdant splashes of tender rice seedlings.

A small crescent bay on a scalloped coastline sheltered a flotilla of fishing boats from the deep, daunting swells of the South Pacific. On the periphery lay the scruffy clutter of Legazpi, capital of Albay province and the country's main eastern port. Majestic Mayon dominated the tranquil setting, its curvaceous hips rising into a gentle cumulus veil shrouding the summit.

Settling into "perhaps the best hotel in town", the following day we comfortably discovered Legazpi's highlights with a hired car and driver. These, of course, are easily discovered in a day if you don't include a hike up Mayon itself, which was not an option at the time since she was being a little testy.

That night, as we slept soundly, a silent shadow crept across the winking Pacific sky, the leading edge of a rude surprise announcing its coming.

We awoke in the morning to the fury of a tropical storm. I had read there was a chance of this, being the end of typhoon season. My gamble didn't pay off.

Now, the average person would be at pains to justify staying at length in Legazpi in the best of circumstances. After all, there is no shortage of resort-studded, bleached ivory beaches in the Philippines. But after a day of being cooped up with the reek of cigarettes and slow decay emanating from our hotel room's carpet, we gave in.

The next day the typhoon gradually subsided, giving us a window of opportunity to slip out to the airport for an early escape. I submitted our names for the standby list at the Philippine Airlines counter and we waited. 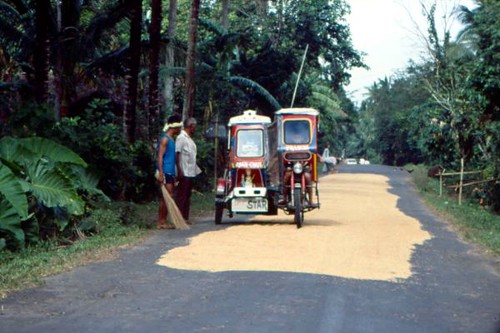 The flight finally landed with what seemed to be the speed of a Swan Lake performance. I watched the jet gingerly taxi up the tarmac and come to a gentle stop before the terminal. Passengers ambled out as their luggage and cargo disgorged from the belly.

Meanwhile, our hotel shuttle waited patiently in the parking lot, hoping to snare some business from the new arrivals. Gradually, however, the crowd thinned out and the parking lot emptied. Reluctantly, it crept away sullen and empty-handed.

Finally, boarding for the Manila flight began. We waited in anticipation for standby passengers to be called. Their turn came and so our salvation was close at hand.

Then, with only two more passengers before us, the plane was full. Horrified at the thought of being stranded, we resolved to try the bus station as a last resort. The only available transport left, though, was a motorized tricycle. Somehow we managed to clamber aboard with all our luggage and roared off in a cloud of acrid exhaust.

The bus station was our deliverance. An air-conditioned express to Manila was leaving within the hour and seats were available. With two tickets in hand, we relaxed in the waiting room in anticipation of our redemption.

Fortune seemed to be smiling on us when we boarded. The two front seats to the right of the driver were free and we quickly grabbed the choice spot. 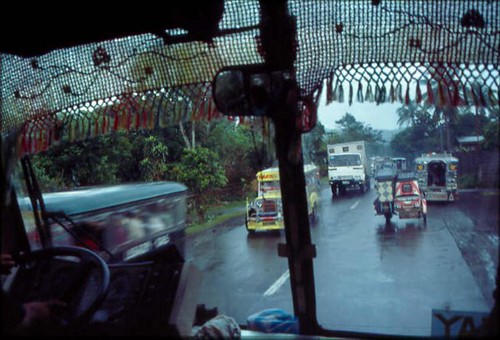 As we pulled out onto the highway, I stared ahead intently at the changing scene. The typhoon had left a wake of destruction in its path and a moderate rain continued to dampen most signs of life.

The steady traffic of trucks, jeepnies, and tricycles thinned out as we left Legazpi further behind. On cue, the bus began to accelerate. Normally I would be silently encouraging the driver to go as fast as he wished, but potholes covered the highway like a pockmarked teenager. The bus began to shake like a vibrating motel bed gone berserk.

Clenching the armrests, I glanced sideways at the driver hunched over the steering wheel in a determined pose. My eyes instinctively followed his body down to the gas pedal. He wore only rubber thongs!

Visions of impending doom flashed through my mind as I recalled stories of Third World bus crashes on the back pages of morning newspapers. Only this time, I would be the news, not reading it.

As the shaking built towards a crescendo, a baby began to wail.

Every journey seems to have its unrepentant crying baby, where only strong impulse control holds you back from trying to smother it. This time, however, it was music to my ears. The crying appeared to make a subconscious connection with the bus driver. He would ease off on the gas until the baby stopped. Then, after a pause, he would accelerate again, but above a certain level, the baby would begin crying. This spontaneous maniac meter was far more effective than the pinging in Singapore taxis when they travel above 80km/h. The driver actually responded to it.

Needless to say, we were not well-rested when we arrived in Manila 13 hours later, nor were we anywhere near a hotel.

As soon as we got off the bus, the employees chased us out of the depot to lock up. 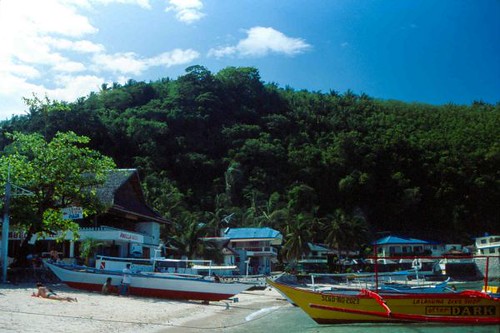 It was 1:30 am and we found ourselves in the middle of what seemed to be a light industrial area—who knows where—with hardly a soul about. When all you want is a comfortable bed to sleep in, you can't help but get a sinking feeling. But you should never lose faith. For, wonder of the ages, a taxi came out of nowhere and we were off to the hotels of Ermita.

A new day and a new plan are like a morning coffee. We were rejuvenated and in good spirits. We caught the bus from the Sundowner Hotel (now Centrepoint) before noon for the short trip to Batangas where a ferry took us onward to the beaches and resorts of Puerto Galera. And maybe because of the crochet banner above the windshield of that bus, the rest of our journey did seem blessed.

It's strange how you can feel guilty over just sitting back on the sand, watching the pirogues drift by on the wind as the sun and the waves lull you into a relaxed state. Being constantly on the go, it took some time for us to settle down to where we didn't feel like we should be doing something. I guess that's what beaches are for.