Up the Creek Without the Toilet Tent 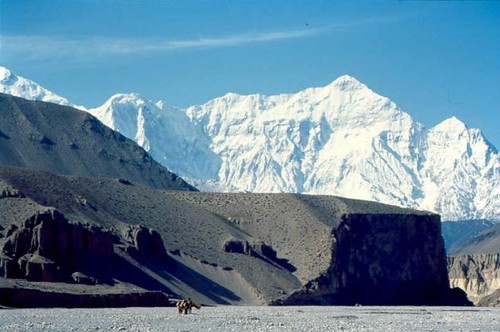 It's easy to take simple things for granted. But when they unexpectedly serve a vital purpose, like preserving your dignity, indifference can turn to reverence.

There were seven of us, along with our guides, porters, and horses. Earl and Nazima, two photographers I was working with, had suggested we go to Mustang, a semi-autonomous kingdom in northern Nepal and one of the few remaining pockets of traditional Tibetan culture. In the 1950s, Mustang had been a base for the insurgency against the Chinese occupation of Tibet, which was why it had been closed to foreigners until 1992.

"Why not go there before it’s ruined?" they asked.

I agreed and persuaded four of my friends - John and Jenny, a Canadian couple; Greg, a Chinese American; and another Canadian, Erik-to join us. We would fly to Kathmandu from Hong Kong, then to Jomosom where we would pick up our support team for the five-day hike to Manthang, Mustang’s capital.

The trek started off on a bad note. Erik was seriously ill with diarrhea and vomiting. At Nazima’s suggestion he mounted one of the packhorses to ease his discomfort. The Tibetan pony, no larger than a carousel horse, seemed more like a burdened beast than a beast of burden.

After three days, Erik had regained much of his strength, outpacing everyone on the trail. Greg and I still felt resistance from the affects of altitude and struggled together against the elements. 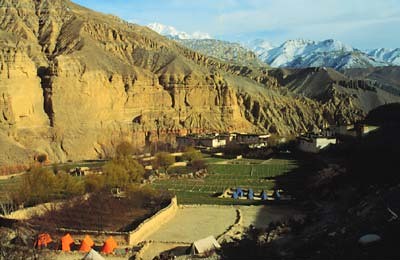 We set out early from Chele, a small village of whitewashed stone houses dramatically perched at the edge of a high cliff above the alluvial rubble of the valley floor. This would be a long day since our destination lay beyond two high passes, more distant than previous days.

Here the trail broke away from our main route along the Kali Gandaki River into a tributary canyon. To continue straight would have been risky since the narrows at Chele were in danger of collapse. Seeing the ravine falling off hundreds of feet from this part of the trail wasn’t any more reassuring-in the event of an approaching caravan, it’s best to place yourself between it and the hill to avoid being pitched over to certain death.

At the summit of a laborious climb, a sudden wind lashed Greg and I with coarse sand. A dazzling but desolate vista unfurled before us. A giant carpet of roughly rounded rocks stretched to the horizon, straddled by rubble-strewn hills naked of vegetation. I called this the Sea of Stones.

Donning surgical masks, Greg and I leaned hard into the gusts from the powerful head wind. It felt as if we were walking under water. Midway, we reached a large chorten and desperately took advantage of its shelter for a quick prayer of deliverance.

Catching our breath, we summoned up the will to continue our punishing march. Eventually, two houses materialize in the distance. I saw pack horses and recognized our bags. We had caught up to our guides!

Entering the nearest stone hut, everything suddenly turned dark. Except for the slight dimness tentatively reaching in from the low doorway, the interior was pitch black. I sensed the presence of people, but couldn’t make out a single shape. 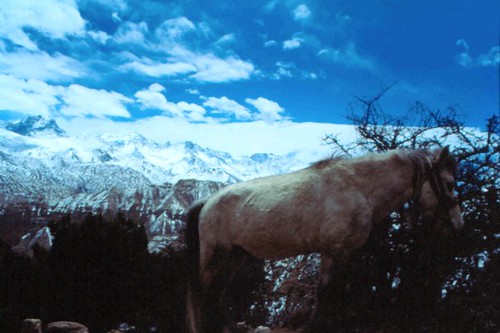 The thick atmosphere clawed at my throat. Then I realized, as my eyes slowly adjusted, that my head was engulfed by smoke from a smoldering cooking fire hovering around the blackened ceiling. I dropped down, remembering from airline safety cards to keep low, and found a place to collapse.

Greg and I were offered tea, but I felt too wretched for even a drop. Lying in a daze, half-conscious of foreign conversation going on around me, I simply longed for relief.

As if reading my thoughts, my stomach suddenly shot through with pain and began to feel bloated. I couldn’t stand it any longer and staggered out of the hovel to escape its poisoned confines. Doubled over next to a horse, I tried to hold the cramps at bay.

Greg and one of the guides hurried to my side. I’m definitely ill and can’t walk on. Fortunately, Thamakhani, our destination, is not far and they hoisted me onto one of the ponies to complete the journey.

I instantly understood Erik’s earlier ordeal. The "saddle" was actually a layering of colorful hand-woven yak hair mats balanced on a wooden frame. Crude cast iron stirrups hung from the frame, but were obviously meant for riders of a smaller stature. I reluctantly used them to help steady myself on the teetering perch.

A short distance from the human smokehouse, we made a steep descent into one of the innumerable ravines that dissect the trail. Pitched forward, I nearly fell off the horse. The horse’s handler rushed to my aid and motioned for me to lean back in the saddle when going downhill.

You Can Run, But You Can't Hide 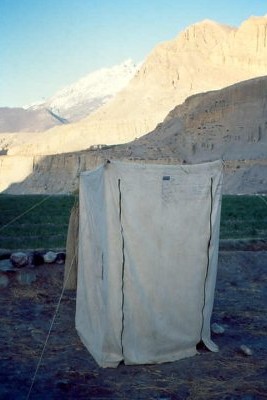 Alas, my struggle with gravity and biology gave out just before Thamakhani. I tried to dismount, but crumpled in a heap on the ground. The short stirrups had cut off the circulation to my legs.

I struggled to my feet knowing I couldn’t fight the pressure much longer, but where to go? The landscape was barren. No boulder, depression, or mound suggested a private retreat within reach. Panic! You can run, but you can’t hide.

Frantically, I clawed at my pants button, forgetful of the audience I was desperate to avoid. The zipper! The zipper! Too late.

A rush of relief swept over me, but reality struck as Greg and a guide came rushing over. Embarrassed, I cast off my soiled briefs and put my pants, socks, and shoes back on. Sheepishly, I weakly continued on foot and within minutes discovered that our camp and the silly looking toilet tent were but a short distance away.

With chills, lack of appetite, headache, weakness, abdominal cramps, and the sudden onset of watery diarrhea and high fever, I had come down with bacillary dysentery. A bacterial infection, it will usually subside without medication in a week. I was to rest and drink plenty of fluids, including rehydration solution.

Meanwhile, Nazima had negotiated with the owner of the livestock enclosure we were camping in to retrieve my underwear and clean it for 30 rupees. I agreed since I hadn't packed many spare pairs.

Although I had a fitful sleep that night with constant visits to the revered toilet tent, I woke up the next morning feeling better. Before setting out on the trail again, I went with Nazima to retrieve my underwear. They were still wet.

Manthang was less than two days away, so I elected to leave them until we returned. Three days should be plenty of time for them to dry.

The constant drinking of rehydration mixture over the next two days seemed to pay off. I regained my appetite enough to partake in the goat the cooks slaughtered for us. I even avoided insulting the King and Queen of Mustang by drinking the thick yak butter tea we were offered during our audience with them. 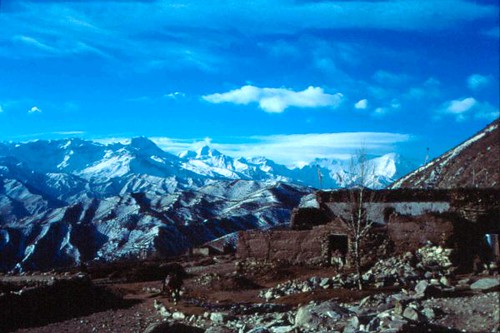 No sooner had we arrived, it seemed, we were on our way back to Thamakhani. The weather was unstable and changed from valley to valley. Reaching the final pass before the hamlet, Greg and I walked straight into a miniature snowstorm. Picking up our pace, we pushed down through the swirling blizzard and emerged on the other side with our former camping spot clearly in sight.

Our crew had arrived ahead of us and our tents were already pitched in the same dusty enclosure I had spent that fateful night. I was anxious to retrieve my underwear, but Nazima was the only one in our entire group who could act as interpreter.

As daylight faded and darkness began to fill in the valleys, Nazima and Earl finally arrived. After getting settled, I asked Nazima if she could inquire about my underwear, concerned that I might forget them in the morning’s haste to pack up and leave. She then disappeared into the shadows, walking towards the house.

After some minutes Nazima re-emerged. Silhouetted in the door’s light, she appeared empty-handed. "Sorry, Rick," she said. "Their dog ripped your underwear to shreds."

# Up the Creek Without the Toilet Tent — Rick Green 2011-03-19 00:10
Thanks, Jill. It was an experience to make one cringe, for sure! But looking back on it now, it is pretty funny, especially the dog.
Reply | Reply with quote | Quote | Report to administrator
# Up the Creek Without the Toilet Tent — jill - Jack and Jill Travel 2011-03-18 23:10
Oh gosh... I didn't know whether to laugh or cringe in embarrassment with you. I agree with Suzy that at least you get a good story out of it