The Demonslayer of Lo Manthang 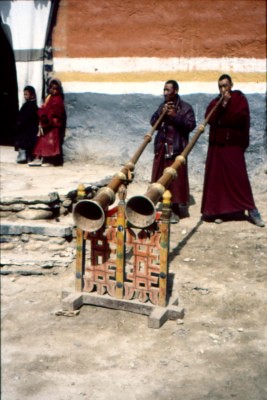 Measured elephantine blasts from the gleaming twelve-foot brass and copper horns erupted over the backdrop of the brisk Himalayan breeze. Accompanied by smaller horns and assorted percussion, the musicians struck a lilting cadence that drew out a troupe of costumed monks from the arched entrance of Chyodi Gompa.

The stout maroon edifice is the last remaining training monastery in the Kingdom of Mustang, a semi-autonomous region in Nepal on the Tibetan border. Chyodi rises prominently from amongst a warren of houses enclosed within the medieval walls of Lo Manthang, Mustang's capital.

The musical commotion attracted a handful of scruffy onlookers who gathered themselves along the top of the earthen walls defining the courtyard's perimeter. As the masked performers lurched down the broad steps, they gradually fanned out into the gray, dusty enclosure, whirling in a mysterious choreography that spoke a fantastic language.

This represented the myth of Dorje Jono, a Buddhist deity who saved his people from the vagaries of a drought brought upon them by his demon father. Normally the tale is performed over three days during Mustang's annual Tiji festival that falls sometime between mid-May and mid-June. However, the Chyodi monks treated us to an abridged performance since our trekking party arrived a month too early.

The Magical Dances of Tiji

Festivities center upon the Dorje Jono character and his retinue of fiercely costumed dancers who perform a series of fifty-two magical dances to repel the resident evil. 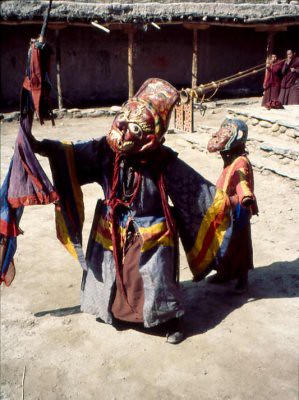 Performers in animal masks then join in the attack, at which time the rituals have finally reduced the demon to a two-foot-long cloth effigy. A succession of blue daggers is ritualistically thrust into the figure and the remains carried off to the king's palace.

On the third day, Tiji culminates with the ceremonial destruction of the demon's remains. Represented by a plump red figure made from barley cakes and black yak hair, the offering is divided into five braziers and carried outside the Lo Manthang's walls in procession. Ceremonies are first performed at the shrine outside the main gate, then at the grain-threshing platforms on the eastern periphery. Finally, the party gathers at the edge of the town's fields for the grand finale.

Arranged on an old tiger skin, the remains become targets for shot from slings and bow and arrow. A fusillade from two antique Tibetan blunderbusses rings out as each brazier is overturned. The battered remains are then flailed with the tiger skin for good measure.

Satisfied that the forces of evil have been dispelled for another year, the crowd breaks up at twilight.

Tiji is a grand occasion with many bedecked in their finest clothes and jewelry. It attracts most of the kingdom's subjects not merely for its pomp and ceremony, but as an expression of the common hope for sufficient water. 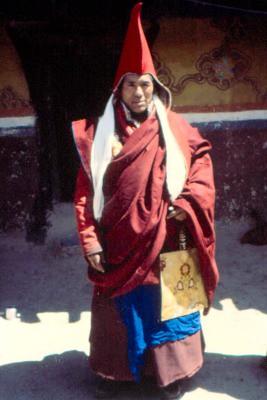 Mustang lies in the rainshadow of the Himalaya where there is not even enough precipitation for trees to grow without human intervention. At best, agricultural production from Mustang's irrigated oases provides sustenance for only eight months of the year. So dependent are the inhabitants of Lo Manthang on the headwaters of the Kali Gandaki that they have actually had to abandon their dwellings and relocate when the river changed its course. People also face stiff fines for transgressions of the town's strict irrigation ordinances.

With the shrinking of its glacial irrigation source in the western peaks of the Dhungmara Himal, water will always be a concern for the Lobas. The myth of Dorje Jono remains as relevant today as it was when Guru Rinpoche first brought it to Tibet in the eighth century. The Tiji festival's future, however, may not be as certain.

Will the next generation carry on the traditions? Will they be more influenced by Nepalese culture as Kathmandu attempts to bring Mustang more closely within its fold? We advised the king to consider creating a museum, just in case.

The following day, having packed up camp and set to leave, our chaperone monk arrived to see us off. He was in very good spirits, insisting on escorting us up to the pass above Lo Manthang as he offered handfuls of candies from his cloak's deep pockets. We soon realized that this unrestrained bonhomie probably had more to do with chang (barley beer) than our company. No doubt our donation for the Tiji performance had burned a hole in his pocket.

We said farewell to the drunken monk.

# The Demonslayer of Lo Manthang — Rick Green 2013-03-09 20:28
Thanks for sharing your blog with us, Ckhanal. My visit to Nepal was one of the best trips I've ever taken. The Mustang trek (adventurocity.com/.../...) was incredible! I look forward to reading about other places in Nepal to visit, especially ones off the beaten path.
Reply | Reply with quote | Quote | Report to administrator
# The Demonslayer of Lo Manthang — Ckhanal 2013-03-07 19:10
I liked your article very much. I started a blog site to promote tourism in Nepal. It is Info-Nepal. You can visit it by going to www.chhayakhanal.com
Reply | Reply with quote | Quote | Report to administrator
Refresh comments list
RSS feed for comments to this post
JComments