I'm Dreaming of a Yao Christmas 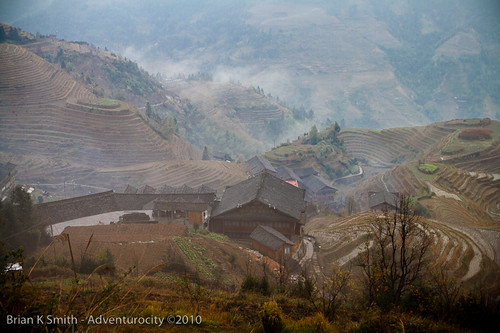 I met Yanhua one December day in 2009 when visiting the Longsheng Rice Terraces in the Guangxi Zhuang Autonomous Region. Chinese security had closed the only road for a visiting delegation from Africa. Yanhua asked me if I wanted to follow her down a trail to Huang Luo, her village, where we could have tea at her family's hotel. I gladly accepted her invitation and spent a pleasant afternoon there before continuing on to Guilin. 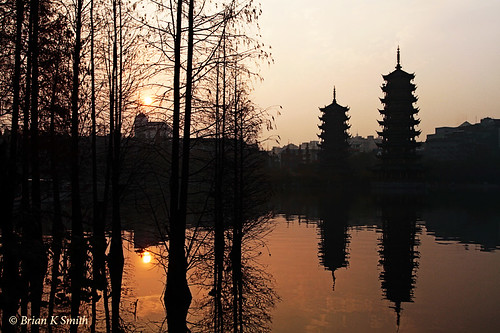 Yanhua and I had exchanged e-mail addresses and kept in touch while I was still travelling in China. I wanted to go back to her village and see the Yao cultural performance that I had missed because of the African delegation. As it turned out, she would be visiting Guilin on December 24 and 25, when I happened to be returning there. She invited me to have Christmas dinner with her family at their hotel, so we arranged to meet in Guilin.

Christmas morning was grey, but without rain. I awoke early, as I had been looking forward to this day for the past week. I could feel this was going to be a very special experience. I met Yanhua, who was dressed in everyday street clothes, and we caught a bus for the two-hour trip to Huang Luo. 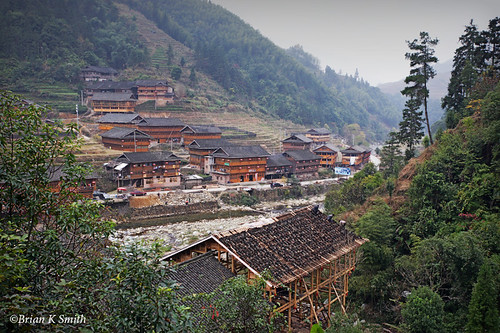 Yanhua's mother, Pan Liufeng, greeted us as we stepped off the bus. She wore her traditional clothing – a collarless, waist-length embroidered jacket; black, knee-length pleated skirt overlain by a black apron with embroidered ties and detailing; and white stockings with black leggings. Her long hair was put up, wrapped around her head like a turban with a large bun in front. 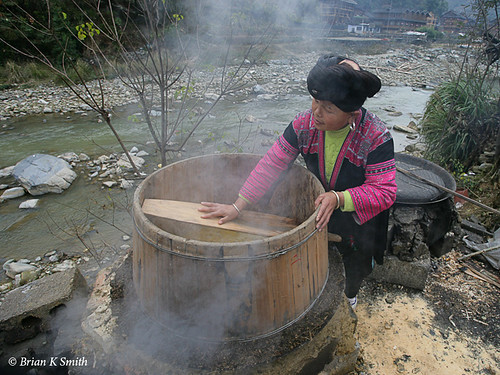 Pan Liufeng and her husband had been boiling sweet potatoes in an open wooden half-barrel, making wine outside in the cool mountain air, beside the river. Like the ale wives in England, the wine makers in the Longsheng rice terrace communities are the women 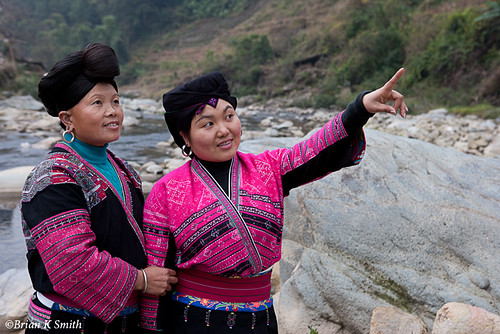 Yanhua changed into her traditional attire. We then did a photo and video shoot with her mother alongside the river. 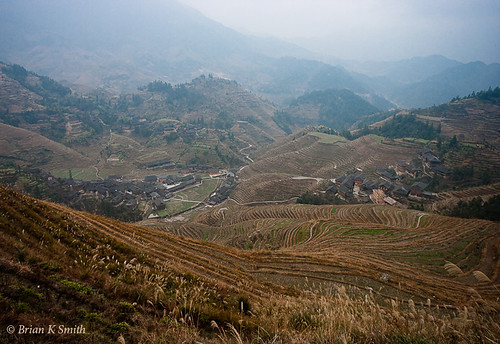 In the afternoon, Yanhua and I took a bus to Dazhai. We hiked for two hours up to the "Thousand Layers to Heaven" viewpoint in the cool, misty, late December air. There was a little sun, but it was mostly cloudy and, on our return, a little rain. This was Christmas Day! What a special way to spend it, no matter what the weather! 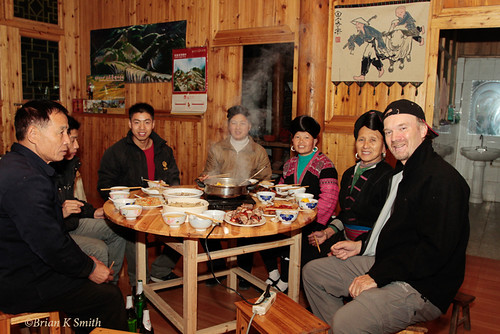 Shortly after arriving back at the family hotel, we sat down – grandparents, parents, uncles, and children – to an amazing Christmas feast prepared by Yanhua's brother, Pan Baoliang, a professional chef. We had duck, fish, pork, beef, sauteed vegetables, and rice with beer and sweet potato wine. I thanked everyone for making me feel so welcomed and they returned the compliment by saying that I am part of the family!

In all my years of travel, this was the most special of all Christmas dinners. There are times when travel makes you wish you could ignore the return ticket home and just stay put for a comfortable while. This was one of those times!

You too, can visit Huang Luo. See our Southwest China Cultural Minorities and Classical Landscapes trip for more details.

# I'm Dreaming of a Yao Christmas — Rick Green 2013-03-19 20:34
The rice terrace photo was shot in winter, so not the clearest time of the year for photos. Also, it depends on what time of the day you are hiking through the terraces. In the morning, they can be obscured by mist until the sun burns it off. It does make for moody, atmospheric photos. We'll post some other photos in our photo gallery (adventurocity.com/.../china).
Reply | Reply with quote | Quote | Report to administrator
# I'm Dreaming of a Yao Christmas — another visitor 2013-03-19 08:50
I enjoy reading it. The rice paddies might have turned out better had the pictures been shot on a clear day in the summer or just after transplanting of seedings, or in late September right before harvest. Well done, Brian.
Reply | Reply with quote | Quote | Report to administrator
# I've been there many times — Jacques 2011-04-21 07:56
They opened this restaurant in march 2009, and I've been eating there every time with my groups. Every time I felt so welcomed that any time the guides proposed an alternative restaurant I refused! It became so much harder for her now that everybody has to take the shuttle bus from the lower parking lot. Everybody just goes straight to Ping An Village! So unfair, but that's all to do with the Greediness of Chinese authorities!

To anybody going to Ping An or Dazhai, if you feel hungry, please stop in Huanglo and try their delicious cooking!

Now I live in Guilin I'll probably go and meet her on may 1st weekend.